Farmington, Connecticut – In one of the earliest starts in the 41 year history of the Farmington Miniature Golf Tournament, nearly 40 competitors rolled out of bed, be it in their home or cars, for an early tee time on Sunday, August 21. While the temperatures were reasonable at 7:30am, the humidity was already present and the field was ready to get started. This year’s tournament returned to a 3-round format, albeit all in one day for the first time. 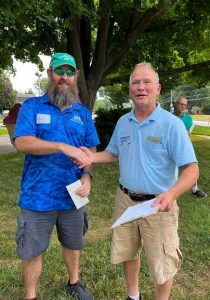 In another first, this year’s tournament was part of the newly formed American Mini Golf Alliance’s (AMA) slate of 2022 tournaments. This no doubt had a part in bringing in competitors from not only all over Connecticut but also as far as Rhode Island and New Jersey. To top it off, in the field was retired competitive eater Tim Janus (Eater X) who was assisted by his “caddy”, the world-famous hot dog king Joey Chestnut – dressed in his best PGA Tour caddy outfit. However, the putting was no joke to Janus or any of the other competitors as the competition for the top spots would turn fierce.

Leading the pack out of the gates was Matt Liles, winner of the recent Odetah Mini Golf tournament in June and perennial contender in New England tournaments. His first round 36 would set the standard to beat and would hold as the low round for the day. At his heels were two-time champion Pat Sheridan with a 39, then a group of five players with a 41 that included Janus, the reigning champion Justin Seymour, past champion Mark “Highlighter” Novicki, up and comer Glenda Ryning and Griffin Weiss, one of the travelers from New Jersey.

Things started to tighten up in the second round with Sheridan closing the gap to just one stroke behind Liles, with Janus, Seymour and Josh Kestenbaum lurking just two strokes behind Sheridan. In the past there would be a re-group after two rounds but the groups were playing through all three this year so there was talk and conjecture around the course as word-of-mouth scores traveled in round three.

Sheridan, by virtue of being in the second group out to play, would set the standard with a 116 in the clubhouse. Novicki, who was in the same group, would finish not far behind with a 121. They then had to wait out over 30 more players to see where the standings would shake out. In the end Sheridan, who was the only player to keep all three rounds under 40, would hold off the field for the win. This was his 3rd win in the past 4 years and put him in a tie with the most tournament wins in their history.

Liles would hold onto second, a clear 3 shots away from the rest of the competition. The real drama of the day would come at third place where Janus and Novicki ended tied with a 121. This triggered a ۹ hole playoff for the last paying place on top of the leaderboard. It looked to be an inauspicious start for Novicki who carded a 5 on the first hole, the well on hole 10 but Janus was only able to best him with a 4. Two holes later they would be all tied up and remain that way all the way through hole 18 and onto hole 4, with a brief interlude to get some other prizes awarded and let participants head about their day. The dramatic playoff ended on hole 5, a difficult to ace hole that has no shortage of testing second putts. Janus took the riskier route up and around to the middle channel leaving him with one of the easier second putts, while Novicki tried to play it safe but didn’t have the ball quite reach the preferred landing zone. With Janus making his putt, the pressure was on Novicki and he watched as his ball took slightly too much of the break and stayed out of the cup.

Sheridan had this to say about the tournament: “I didn’t have huge expectations going into this year. I had very little practice on the course but I always feel confident here given my experience, and the course was in great condition. I just knew there were a lot of good putters out there and this course can give and take on a whim sometimes. I was a bit lucky and caught more breaks than I lost today. I’m also happy I didn’t have to be in a playoff. It was fun to watch but not sure I would have had the stomach for it today.”

This tournament also splits the bracket into an upper tier and lower tier to give individuals in the middle of the pack a chance at some prizes. This year the split happened after the 21st place. This left James Costa, from RI as the 1st place winner over D.J. Torroni from NJ who had to leave before the tie-breaker could be played. Both players carded a 146. Dick Stratton also took 3rd place by default over his tied competitors, all three of which had a 148. Other prizes for holes-in-one on certain holes were also awarded after the tournament.

The next AMA tournament will be the Lee Stoddard Dolphin Open at Dolphin Mini Golf in Boothbay, Maine on September 10 and 11.